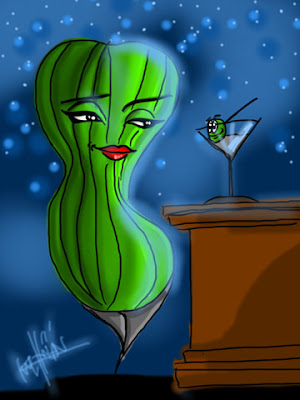 Olives have always vexed me - they are a strange food - I have no idea why they are popular, but I suspect that it has something to do with the fact that they are always finding themselves in martinis!
Posted by krishnan at 10:09 AM 1 comment: 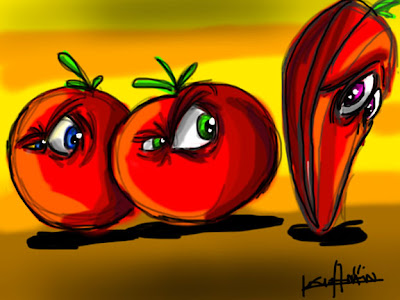 The chili pepper is the Math-a-lete off the food world - and the tomato is definitely on the football team - this one goes out to all those math-a-letes that probably spend high school avoiding the main corridors for fear of getting the crap kicked out of them. You will one day grow up into the indispensable spice of the world!
Posted by krishnan at 10:07 AM 1 comment: 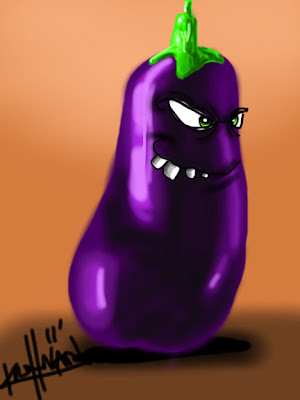 I know a lot of people love eggplants, but I find them frankly creepy and unnerving. If they were allowed to drive, the would definitely be roaming around the city in white vans with the windows painted out....
Eggplants are just weird!
Posted by krishnan at 10:05 AM 1 comment: 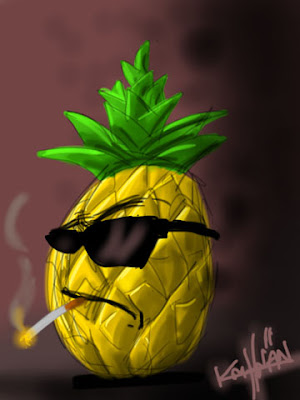 Pineapples are just bad ass - in the fruit and vegetable community, they would be the ones riding old triumph motorcycles, wearing leather jackets over vintage Rolling Stones T-shirts smoking Marlboro Reds while listening to Floyd....
Posted by krishnan at 10:02 AM No comments: 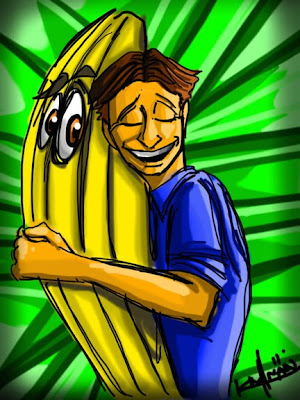 Humans share remarkable sequence homology with among other things, bananas (something like 50-60%). The similarities are even higher when we move up the evolutionary tree (primates are basically dumber furrier humans). When you really consider this though, it isn't really that surprising - transcription factors, metabolic genes, genes involved in cell cytoskeletons, cell cycle regulators etc are pretty much the same....
What I think makes me chuckle is that if bananas were conscious, they would view humans with the same skepticism that cows do now.
Banana: "Let me understand you, you are going to cultivate me so that you can proceed to eat me? Ummmm not sure I am cool with that"
Posted by krishnan at 5:35 AM No comments: 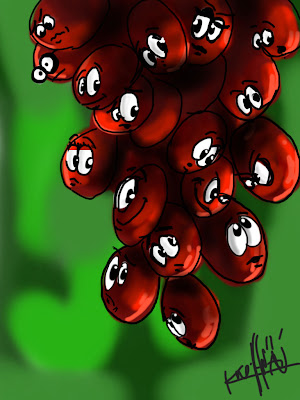 We rarely get to choose our families - but imagine being stuck at the hip on a vine with the crazy uncle who always creeps everyone out....FYI, if you cant identify who that is in the family, a note of caution...it might be you.
Posted by krishnan at 5:33 AM No comments: 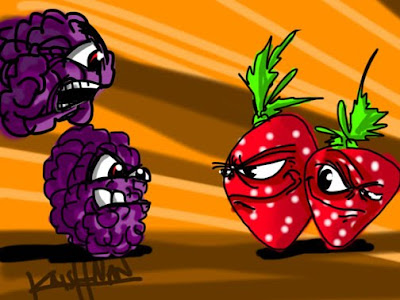 With the highly variable temperatures (it was something like 55 a few days ago, and then suddenly, snow storm - 20 degree weather, and general mayhem) and spring rapidly approaching, I (and my stomach) have been thinking a lot about fresh produce and food - thus, this week will be all about food! =- drawings (cartoons mainly) about fruits and vegetables, and whatever else pops into my head.
This little drawing came to mind when I was looking at smoothie ingredients and realized that strawberries - well represented, other berries, less so - what envy that must cause.....
Posted by krishnan at 5:30 AM No comments: 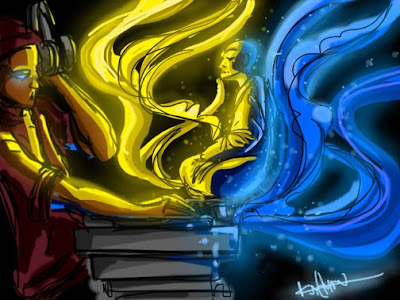 The amazing thing about the Wu is the breath of their appeal. There are a non-trivial number of suburban kids who are huge fans....in some of the same ways as Dave Chapelle and the Roots cross over in their appeal. As in the cases above, another key feature of their appeal is that they (Wu, Roots, Dave, et al) are generally admired by other creative people. For instance, listen to Dave on inside the Actors Studio - it is pretty amazing...
With respects to the Wu, and RZA in particular, the number of musicians that are in awe of his talent is pretty substantial. When he isn't dropping beats on the Afro Samurai animated series, he is pairing up with some heavyweights in music to do amazing things. Consider for instance, Blackroc, a collaboration with the Black Keys. I think one of the best parts of this colabo is to listen to Dan Auerbach and Patrick Carney talk about meeting RZA on Fresh Air (which as a complete aside, I cannot tell you how awesome listening to Terry Gross is). Listen especially around 36:02 - "I couldn't even speak to him, I was so nervous".
I have to say that Wu-Tang week was a blast - Any suggestions of future theme weeks or things you would like to see would be great -

Posted by krishnan at 3:24 PM No comments: 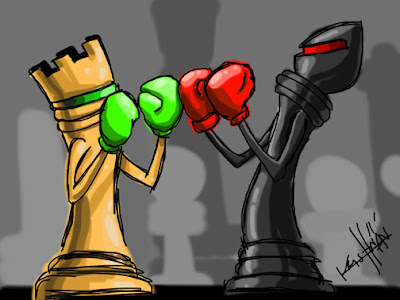 On 36 chambers is the great track "Da Mysteries of Chessboxin" which was apparently inspired by (and samples) the classic kung fu film of the same name. What is remarkable is that chessboxing is an actual sport...somehow, the image in my head is less about people, and more about chess pieces beating the crap out of each other....
Posted by krishnan at 3:20 PM 1 comment: 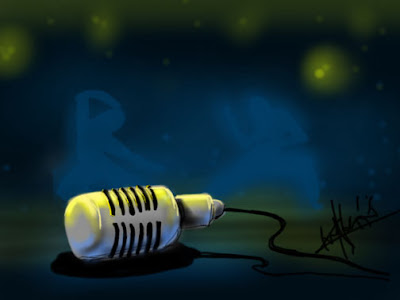 Although 36 Chambers has a really raw feel to it, there is one track that is decidedly different and exudes a kind of contemplative quality (for lack of a better word). The track, "can it be all so simple" samples from the Gladys Knight's "The way we were" but the beat and the lyrics are just ridiculous awesome - just something of this that makes me think of the mood of this drawing....
Posted by krishnan at 1:34 PM No comments: 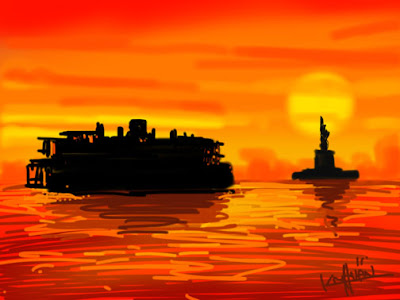 One of the standout solo albums for Wu was GZA's Legend of the Liquid Sword.
The intro, which is pretty hard to find on youtube...can be heard on Grooveshark. Young Justice, who I assume is the voice, kills it with this:
"It was the summer of '77.
NewYork was just recovering from the riots due to the blackout.
HipHop was young and growing rapidly, it was during that time when my father would oftent make journeys accross waters...... The ferry, or the boat, as most called it, was a floatin' forum, for talent especially MC's, who would often battle while in route to the city. It was on the boat, where he would sharpen his sword on neighborhood MC's, preparing for the battles that were soon to come.."
Posted by krishnan at 9:24 AM No comments:

Ghostface's 1996 Ironman and Supreme Clientele were both the kind of albums that cemented Wu members' staying power as solo acts. There is a great NPR story (which is basically awesome because to hear Terry Gross say "protect your neck" pretty much makes my day) about the business of hip hop and what the Wu did in terms of artist management. I think that the business strides made by Wu members in terms of musicians controlling their own destiny is pretty interesting - and the best part is that the Wu as a business entity has been cemented in popular culture with Wu Tang Financial (is it just me or is the old woman throwing up the Wu just awesome). 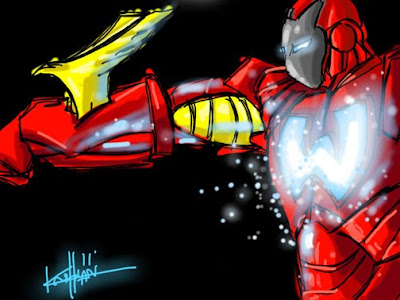 Posted by krishnan at 8:13 AM No comments:

RZA is apparently a huge chess fan, and wikipedia tells me he is actively involved in the hip-hop chess federation. Something about this probably traces back to images from the Ben Kingsley movie Searching for Bobby Fisher. 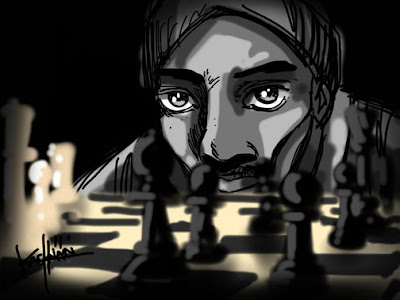 This week is devoted to one of my favorite hip hop acts of all time - Wu Tang Clan - 36 chambers was their first release (1993) and inspired by an old Gordon Liu kung fu movie 36 chambers of shaolin - Beyond the awesomeness of their beats (thank you RZA) and the absolutely original lyrical style, this album is just plain cool! The juxtaposition of the Wu-Tang style at a time when a lot of hip hop from the east coast was being dominated by the P-Ditty sound, Wu was just so original and the lyrical stylings of OBD, RZA, GZA, and Ghostface was just so distinct and original and raw.... 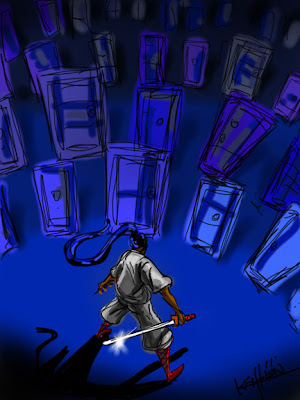 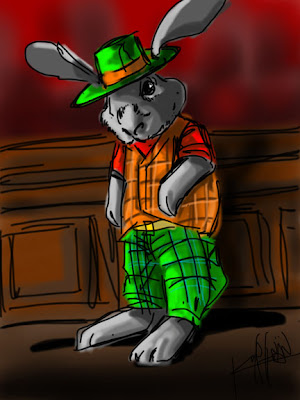 One of the best showns on TV, Psych has a great episode where the main character, Shawn, "crashes" a corporate retreat - his introduction is one of the funniest thing you will see - ever - period!!!! But also heartbreaking in the way that only satire can blend the two. The scene is the essence of awkward, and I had this image of a "fish" (or in the case of the drawing, a rabbit) out of water trying to get into a conversation, but always resigned to the fringes (a wallflower) of the party.
Posted by krishnan at 9:25 AM No comments: